Getting to work: how to make your daily commute to Brussels more sustainable

If you’ve been working in Brussels for a while now, you must know a few things about how complicated it can sometimes be to commute by car. As a good resolution for 2020, why not change your habits and stop using the car? In order to help you, here are all the ways you can have a more sustainable daily commute in Brussels.

You’re not stuck in traffic, you are the traffic

In Brussels, more than 2.5m people commute from home to the office and back. Every. Single. Day. That’s nearly 400,000 cars driving through the city, creating unbearable traffic jams, frustration, and unbreathable air. Well, if you’re in one of these 400,000 cars “you’re not stuck in traffic, you are the traffic”.

But before diving into solutions, we tried to understand what’s happening today and what the public authorities are doing to fix the problem.

What’s the situation in Brussels?

Today, between 7 and 8% of journeys across Brussels are made by bike! And this percentage has been constantly increasing for the past 5 years. The city is slowly getting more bike lanes and putting efforts into overall urban development for a greener city.

When it comes to car use, Brussels car commuters waste more than 80 hours in traffic every year. That’s the time you’d need to watch every single episode of The Prince of Bel-Air. PLUS SIX WHOLE HOURS.

On a less funny note, the deterioration of public health due to local pollution in Belgium is now undeniable, with more than 10,000 premature deaths in 2017. To help you realize what this means for you, download the “Shit, I smoke” app that counts how many cigarettes you unknowingly smoke per day, just by breathing the air around you. As a Brussels citizen, depending on the traffic, it varies between 1 and 6 cigarettes.

And what are citizens and public authorities doing to improve this situation?

On the other hand, the Brussels region has defined a low-emissions zone in the whole region since 2017, but excluding only very old diesel vehicles (<2000s). Progressively, the most polluting cars won’t be allowed in the region.

Electric cars are also starting to become affordable. Also, starting 2023 or 2024, the Belgian tax advantage for company cars will only be granted for vehicles that do not emit CO2. Even though electricity in Belgium isn’t fully green, driving an electric car does not release any CO2 locally, so that’s already better.

Finally, corporate mindsets are also evolving and companies are increasingly allowing home-working. Which is indeed the best way to reduce traffic.

That being said, all these solutions can’t come soon enough. A 2-degree global warming is just around the corner and we’ve all committed to reduce greenhouse gases through the Paris Agreements in 2015.

However, public authorities’ policies will take time to be completely implemented, partly because this situation is happening all around the world. That’s also why your active contribution is needed, more than ever.

How you can contribute to a more sustainable commute

So what can you do in this messy situation to have an actual impact? Change. Your. Habits. Easy to say, right? Maybe the little diagram below can show you where to start: 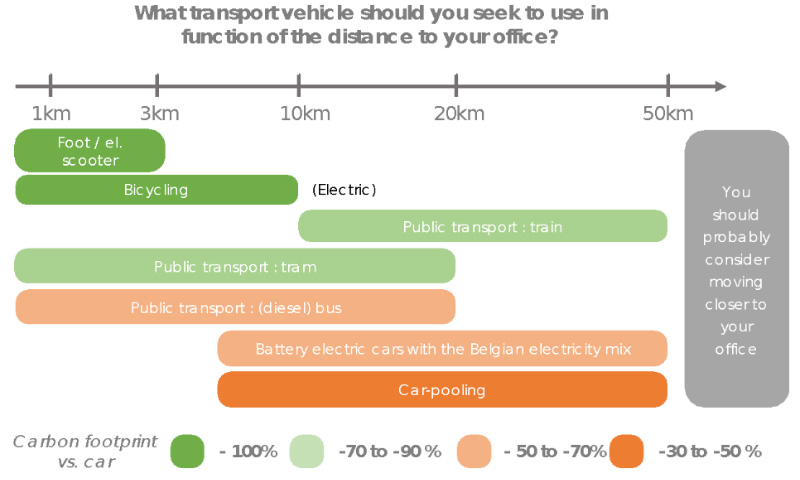 Car-sharing: if you own a car or use a company car today, you could consider a car-sharing system instead. It avoids you owning a gazillionth car, which might push you to use the car less frequently while still having the flexibility to use one when you need it.Not sure which service you can trust? Poppy, DriveNow (They stop their activities at the end of February 2020), Ubeeqo, Cambio, Virtuo and Zencar. We know, that’s a LOT of solid options. To give you an idea of the cost, DriveNow would range between 70€ and 300€ per month depending on how much you use it.In terms of the type of use, Poppy and DriveNow are probably the best options for short and frequent distances, Ubeeqo or Virtuo for less frequent and longer rentals.

Carpooling: this is also a good and more sustainable option to go to work, for example, via commuty.net or eventpool.be.

Public transportation: you should definitely check if public transport can get you to work in less than 30 minutes! If you have that chance, then the STIB monthly pass will cost you 50€ a month.

Bicycle & electric scooters: the Villo bike membership costs 33.6€ per year with each first half-hour free. It’s a great option for people who don’t want to worry about their bike all the time. Then there are the Uber Jump or Billy electric bikes and all the different electric scooters (Scooty, Lime, etc.), for which you usually pay between 1,5-3€ per trip.

Moving: if none of those options are convenient, then you might want to consider moving closer to your office, into a Cohabs coliving house for example.

Just remember: you are traffic and your daily commute does contribute to Brussels’ air quality and overall quality of life! You can have a visible and meaningful impact and contribute to a more sustainable city, but hey, it’s up to you.

About the author Cohabs Member & Writer about sustainable development

How to become a digital nomad

Digital nomadism has seen a tremendous increase in the past few years. With internet and 4G available almost everywhere on the planet and the always growing need for digital skills, you can now work from wherever you want. But how do you take the leap?

Not feeling like working from home today? Weve put together a short list of the best coffee places in Brussels that features great wifi and a strong work vibe.

The best alternatives to owning a car in Brussels

Why I’m starting a coliving startup

How we are planning to scale our coliving startup

Brussels: 4 things to know before moving to Belgium’s capital city

Notify me when you open a house in my dream city

We use cookies to ensure that we give you the best experience on our website. If you continue to use this site we will assume that you are happy with it.Ok